More than 3,000 gathered in Orlando, Florida, and online for United Women in Faith’s Assembly 2022, held May 20-22 at the Orange County Convention Center. Twenty-four countries and all 50 states were represented at the event with the theme “Turn It Up!” Read more on our blog, and check out the photos of this inspiring event on our Flickr page! Many of our own Desert Southwest Conference women attended. Here are some of their stories.

This was my first time at Assembly. It was exciting to see so many like minded women from across the country and overseas. The speakers were inspiring and  had high energy. The music was dazzling and inspired. Saturday night CEO Harriet Olsen discussed the future of United Women in Faith. We are called to invite women of all faiths to become a force in the world through the ministry of United Women in Faith. It is truly an event each of us need to experience once in our lives. I plan to attend the 2026 Assembly in Indianapolis, Indiana. Why don’t you put it on your bucket list? See you there! – Submitted by Sandy Flaherty, Western Jurisdiction Treasurer 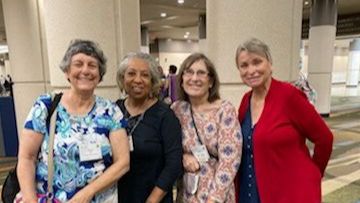 Music lifted our hearts and souls every morning: old traditional hymns, contemporary praise songs, and even a song written especially for Assembly, “Turn It Up”! We raised our voices as our speakers raised our awareness and our intentions. Shannon Priddy, our previous National President, and Ainise ‘Isama’u, our current National President, introduced our new name, United Women in Faith and the inclusivity and new options it brings to women around the world. Heather McTeer Toney, lawyer and environmentalist, and Janet Wolf, theologian-in-residence, gave impassioned presentations on climate justice, one of the priorities of United Women in Faith in 2022. Heather related the picture of the beautiful pastures in Psalm 23 to the Mississippi Delta today and the disparities of the environments of varied communities in our country. She called on us to “connect the dots” between social justice and climate justice in the church; we must care for other’s environment as we care for our own. And if that seems to be a daunting task, we must remember, “nothing is too hard for God!”

One phrase which stood out for me from Assembly was that “United Women in Faith is not a Social Club!” We are here for a purpose! Our faith is our foundation and we are to go into the world to perform acts of love, acts of faith, and acts of change. – Submitted by Carol Johnson, member committee on nominations

After much anticipation and lots of training sessions, I attended the first Virtual Assembly ever presented for the United Women of Faith. The in person Assembly for 2022 was live in Orlando, Florida and was recorded and zoomed to another 1200 women. I had attended my first Assembly in 2018 (in-person) in Columbus, Ohio. It was interesting to compare the experiences. This 2022 Assembly was very diverse and action oriented. The music was fantastic with an emphasis on the African American Jazz and Gospel music traditions.  Much of the program was devoted to explaining the renaming of UMW to United Women in Faith. Hopefully, the new naming and new online programs will influence and serve new women who have never joined as active members. – Submitted by Billie Larime, Mission u assistant dean